One year ago, tragedy struck again. This time at an outdoor music festival featuring Jason Aldean. One man planned and executed this attack. He carried out his cowardly terror attack on numerous innocent victims from all over the world. Many people were just enjoying food, beer, and music. Everyone was just having a good time.

Just as Aldean was playing one of hits, shots began firing. Aldean stopped the show. People thought it was fireworks. Nope, these were gunshots. People started running for their lives. Texting or calling their loved ones saying that they were shot or dying. A scene out of a war zone or horror film. I was working that day and was shocked as to what I was seeing.

Another madman out to kill. Pure madness and no regard for human lives. The gunman killed 58 and injured countless others before it was all said and done. Las Vegas quickly become one of the worst mass shootings ever in our history. One of the survivors was a doctor that specializes in PTSD chronicled their own account of the event.  The details in that book were unbelievable and very stomach churning.

One of the most heartbreaking and uplifting stories was Rosemarie Melanson’s story. Hers is a complete miracle. She was there with her daughters and one of them were shot. Rosemarie was found 11 hours later and was placed on life support. Her wounds ripped through her stomach, spleen and liver. One year later, she’s heading home. I can’t imagine surviving very serious injuries like that let alone live in a hospital for 365 days. Her medical bills alone are probably through the roof unless she had a Go Fund Me page.

The stories that were told are very gruesome and traumatizing. It begs the question, what happens now? How do we move on? For most, you don’t ever recover from something like that. Never the same. I will never know what motivates people to destroy other people’s lives. People who do this must have no conscience or regard for human life at all.

Just because we are upset or something triggers them to do it, violence is always preventable. Yes, in an imperfect world there will be horror, but we as a society can take action and help prevent the next disaster. Imagine the pain and never relenting nightmare of that attack. Your mental health starts to disintegrate and you can’t even recognize yourself anymore. Depression and PTSD hit you like a freight train. Some suffer in silence and others get help.

Think about what happens when people commit these acts. We as a nation and the entire world all suffer and pray for everyone. Our hearts become heavy with grief, anger and pain. And a demand for change. Change can happen. I want to see a lot of change! I don’t want to see another family ripped of their loved one: their child, a spouse, a brother or sister, an aunt or uncle, and etc. No more. No more violence. Spread the peace. #Vegas Strong. 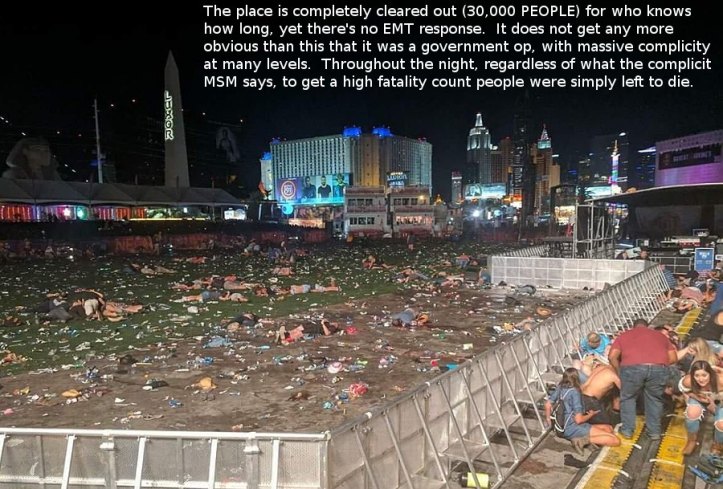 The most sickening display. The aftermath. Blood everywhere. Once was vibrant crowd is no more. Do you want change? Or do you want to see more action? Spread the peace.