Hello! My name is Anxiety and I’m your new best friend! We are going to be together forever and we’re going to do so many things together. We’ll be BFFs, we’ll take selfies together and paint the town red. LIAR, LIAR, PANTS ON FIRE!

Goodbye Anxiety, we will not be BFFs at all. No freaking way. Not in this lifetime and/or beyond. We will not take selfies with each other and we will not be painting the town red. Instead, we will be forever mortal enemies till the end of time. I don’t care for your friendship. I will not “friend you” on Facebook nor follow you on social media. You are not allowed near me nor any other living soul. You are not wanted in this world.

Unfortunately, this pain in the ass or whatever expletive you want to enter here called anxiety, is the spawn of the devil that targets all of mankind. This pain in the @#$ loves to target its prey at all hours of the day, week after week, month after month, and year after year. This giant nuisance has become attached to me like glue. Imagine stepping on gum. You can try to scrap it off, but it’s still there. Or like being super glued. Miss Anxiety is out looking for customers. She’s kind of like a shark in the ocean looking for lunch. Cue the theme from “Jaws”. Once she’s locked you in with her tractor beams, you’re hers (Forever!). It’s like the devil taking your soul when it’s not even for sale at all. A thief robbing you of your most prized possessions: your mind and your body and your soul. Flashback to the 2004 film “Passion of the Christ” and focus in on when Judas is violently attacked by demons. Living with anxiety feels just like that. You’re by yourself and they’re all around you. Their eyes are creepy, their voices and laughter are beyond terrifying. Haunting you, stalking you, threatening you. That scene is very true to life. I can’t watch that movie nor insert a picture from that movie because it’s too scary to look at.

Of all the things that I’ve endured living with the Triple Threat Disease (Depression, Anxiety and Panic Disorder), this one is the strongest of the trio. With depression, I can try to look on the bright side and keep my sanity in check. This isn’t always easy when the rain clouds follow you on a consistent basis, but I’m a survivor. Panic attacks aren’t that bad for me like they used to be. Whenever they strike, I always think about my body. I take deep breaths and relax my fast beating heart rate and very high blood pressure. But anxiety, NO. This thorn in my side runs on a whole different level than depression and panic disorder. This one is leaps and bounds ahead of the other two and is the most annoying one than the other two.

Miss Anxiety will get out her butcher knife or meat cleaver and will strike you again and again like a hunter killer. She won’t stop until you’ve had enough. Abusive, isn’t she? Oh, Yes! She’s left so many scars inside me that I lost count. She doesn’t care where you are and what you are doing, she’s right there always waiting for the kill. That moment ready to strike and BOOM! She’s got you!

Miss Anxiety is like a cyclone in your head. Wind speeds up to 150-200mphs. Violent thunderstorms and lightning are illuminating the sky in your head. Constant torrential downpours are causing dams to collapse and serious rivers to overflow. She is like a Mount St. Helens waiting to erupt and spew hot molten lava everywhere. You can’t escape from her wrath. Her force is like an earthquake inside your body. She registers as a 10 on the Richter scale. Your entire body is shaking and trembling especially during the aftershocks. Her rainfall is enough to flood the entire planet Earth multiple times. It would baffle scientists nationwide. She’s more powerful than any asteroid or any other natural disaster that can strike this world. Mother Nature is scared of her and can’t be found anywhere.

She’s black all black. No colors. She’s not blue, red, green or yellow. Her armor is all black and complete with horns. She’s so terrifying and so butt ugly to stare at, she makes the toughest humans blush and puts the fear of God in them. Scarier than my youngest Chihuahua.

Anxiety will send your heart racing faster than a professional racehorse. Her stench is enough to make you dizzy, nauseous, and even make you throw up or give you diarrhea. Nasty woman. She will wrap herself tightly around your body like a huge boa and will literally take the breath out of you. She asphyxiates you to the point where you can’t even get an ounce of oxygen in your brain. “Inhale the carbon dioxide, not the oxygen” she says. Anxiety will cause distractions inside your head. “You’ll not be allowed to focus at work or school. This is not allowed,” she said as she berates you. She loves to cause brain farts, low to no concentration and splitting headaches, too. Anxiety loves take a sledgehammer to your head and violently, bludgeon you to death. Think of a bad migraine!

Your breathing becomes harder and harder that your chest will start hurting you. She doesn’t care about your body and your internal organs. This is her mission. She’s meaner than the T-1000 in Terminator 2. She’s a lot more advanced than that. One of her favorite hotspots to go clubbing is in your “Fight or Flight” center. That’s her club. Picture her nasty self all dolled up in her outfit dancing to ELO’s hit song “Evil Woman”. From head to toe, she’s dressed in all black. So ugly that she brings new meaning to the word “ugly.” She will party in your system not just at 2am, but during all hours of the day and on any given day. She doesn’t sleep at all and won’t let you sleep either. Chronic fatigue, chronic yawning, brain fogs, and low concentration are the gifts she brings you from partying all night long. She’s restless and relentless.

You can threat to fight her. You can tell her to stop. But sometimes, she’ll just blow smoke up our butts and declare victory over us. This is a constant battle that I fight with everyday. My inner fighters have formed their own alliance. Their own cartel. And their very own army. Everyday, these anti-anxiety fighters suit up and prepare for battle. They go over their battle plan and lock ‘n’ load their weapons. This is an ongoing war inside my head and they won’t stop until the big bad wicked witch of West is dead and buried. She won’t even have any time to curl up those legs because they have already killed her. 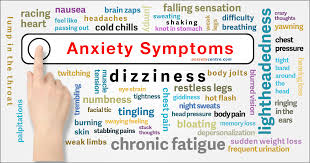 These freedom fighters in my head fight the war on a daily minute by minute basis. They don’t eat, sleep, nor stop. They fight until the job is done. Granted, there have been numerous casualties and other Special Forces have been called into action. They fight for my life, my happiness, and my sanity. Honestly, if I didn’t have an arsenal of help, I wouldn’t be here. Miss Anxiety, the beast, would’ve won and erupted in evil laughter. She’s the grand daddy of them all and is one of the hardest to kill, but she is beatable. You can fight her with anti-anxieties, therapy, and with a positive attitude. Never succumb to her and let her win like a bully. Be the bigger person and take her out in a healthy way.

Somedays, her wrath is overwhelming and other times, it’s bearable to a certain extent. Somedays, she’s like an infectious disease or a cancer that eats away at you. She devours you like a dog devours a bone. How you deal with her is different from others. She’s taken 25 years of my life away from me. I can’t have it back because it’s gone forever. So what if she continues to take some more years away. She’s making me more powerful as each day passes. She’s pretty much losing power by giving me her power. I will fight her with every fiber of my being. She does make the “Big Bad Wolf” look handsome because she’s that butt ugly of a beast. We all have the power to defeat her. It’s inside of you and you need to find it and carry it with you. Don’t lose that power.