Bring on the waterworks! Don’t bring me down! 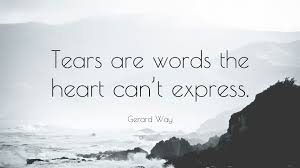 I will admit that I’m not much of a crier, but there are times when my depression will hit me so hard that tears will start streaming down my face. For some people, they tend to show their emotions differently than others. For me, I tend to bottle up my emotions and sometimes keep them locked up. However, that’s not good at all. I guess it really depends on what happening in my life that will cause me to express those emotions through tears.

I remember when my mother was in the mental hospital receiving treatment and I watched her become violent, and I cried. Throughout the four months that she stayed there, I would cry myself to sleep. During visitation hours, I would see patients that were in the same boat as she was in. Some patients would let out a loud scream because they couldn’t control their emotions. I will tell you that it’s scary visiting a mental hospital and I was not used to hearing patients screaming. Some days, I just couldn’t handle it and when someone sees me crying, they have no clue at all as why I’m crying. During my breakdown in 2005, I spent a lot of days and nights crying because I was in misery and didn’t want to live with depression. I’ve noticed in the past year, I have been more prone to crying. When I transferred to a new medication, I’ve noticed that it has been making me more emotional than before.

Sometimes when I’m trying to sleep, I will get emotional and cry. Other times, when I’m at work or in public, I can cry easily if provoked. When I transferred to my new Starbucks store, I didn’t want to transfer because other co-workers told me that it sucks over there. I will admit that I absolutely hate it there. I really miss my old store. At my old store, I had so many co-workers that I loved working with and at my new store, there are a lot of co-workers that are a royal pain in the ass. One day at work, a barista upset me so bad and gave me the worst attitude ever and I just walked right off the floor. I was this close to cursing that barista out, but maintained a professional attitude. My heart was pounding, my anxiety was through the roof. And it was because that barista was so sassy to me for no reason. I remember one time I was taking an order and couldn’t hear the customer and the barista said: “Are you deaf? Listen to what they’re saying!” Right after that smart ass remark, I said: “If you talk that way to me again, then you’re out of here. I’m your manager. You do not speak to anyone including your manager like this. I’m a lot older than you and I have more experience than you do. So don’t say another comment or else you’re fired. Case closed.” She just walked off the floor and checked her Instagram on her phone because that’s so important to her. Anytime you try to talk to her about her behavior, she ignores you. Remind you that she has no manners, no respect and doesn’t care about other people.

I don’t understand why people need to be so obnoxious, and be straight up rude. I don’t put up with that. I even confronted that co-worker and told her to shape up or get out of my store. I went in the back room and cried mostly out of anger. What’s really upsetting is that most of the co-workers let her get away with this kind of behavior. I don’t! She has an opinion about everything and everyone. I told her to be careful about what comes out of your mouth because you can offend someone. Of course, she doesn’t care. Most kids her age have no respect for elders. I’m her boss and I get zero respect from her, because if she respected me than she wouldn’t sass me with her attitude.

Every time that I work with the particular barista, she cops an attitude with other partners, plays nice to customers (kisses their ass), but really is a bossy, spoiled, lazy and privileged teenager. I’m 34 and she’s 19. There’s such as big age gap and I started working when she was just 3 years of age. So to try to put stress on the manager and other partners is something that I will shut down immediately. If you can’t be nice, then get the hell out of my store. I’ve gotten so mad at her that even tears fell from my face because I can’t stand being around her even as a person. She’s a bitch from hell. And she’s not well liked by other partners at all. Everyone that works there knows that she has a horrible attitude and a horrible personality, too. Why she works there? I don’t know. But if you’re going to work on my team, I expect complete professional behavior and attitude or else you will be in the unemployment line.

The transition to my new store from my old store is hard even after six weeks have already gone by. But I miss my old store and want to go back there. The kind of people at my new store are a lot meaner than I’m used to, so it causes me to suffer more anxiety and more angry tears. Some days, I tell myself to not let it ruin my day and other days, I just want to quit. However, quitting is a stupid thing to do just because one co-worker is a bully. I can’t stand to be near rude and sassy people especially ones that try to boss me around. Nope! You get no respect from me. If you’re going to treat me like dirt than I will treat you the same way. It’s called karma.

What I need to do is take a step back and de-stress myself because if I don’t relax than my body will suffer. Just recently, I experienced chest pains because of stress at work and dealing with that pain in the butt barista. I shouldn’t have to lecture people on how to behave especially on the job. I mean, common sense goes a long way. I shouldn’t have to sit there and cry out of frustration because some people are completely nasty.