What NOT to say to people suffering from depression! 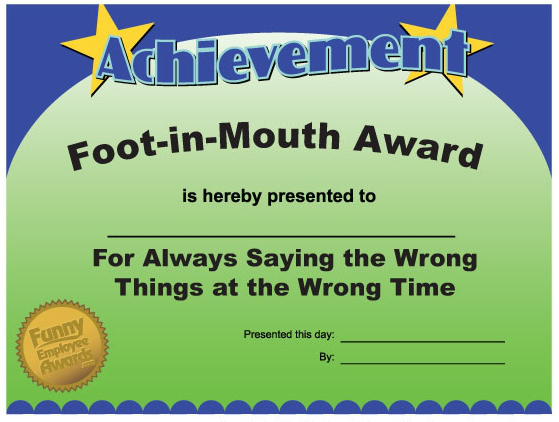 At some point in our lives, we all commit this sin. We say something that we shouldn’t have said and regret it immediately, or we say something that we don’t think is offensive, but really is. Whatever the case maybe, be very careful when choosing your words wisely before they exit your mouth. I will give you an example: I’m 34 and I absolutely loathe (I mean LOATHE) it when people say that I have a baby face. Most people have well intentions but when most say it and I get offended every time. It’s fine to say it when you’re past 40 and up, but to say in a way that makes me feel like I’m a child, is rude. Too often in retail, someone will ask for the manager and here I come. When I introduce myself, customers will always say: “You’re the manager? I was looking for someone much older than you.” I will say: “How old do you think that I am?” And most will say around the age of 21 or thereabouts. So rude! Cue the picture above. Congratulations! You have just insulted me by putting your foot in your mouth. A 34-year-old woman with more than 16 years of experience in retail should never been viewed as a child just because she looks about 10 years younger than she is.

So with that being said, I’ve had people put their feet in their mouths way too many times throughout the course of my life. I’ll share some of my biggest no-nos when it comes to talking to someone living with depression.

Remember the old adage: “If you don’t have anything nice to say, then don’t say anything at all.” Think about that very carefully when speaking to everyone! If you do say something for people with depression then say the following: