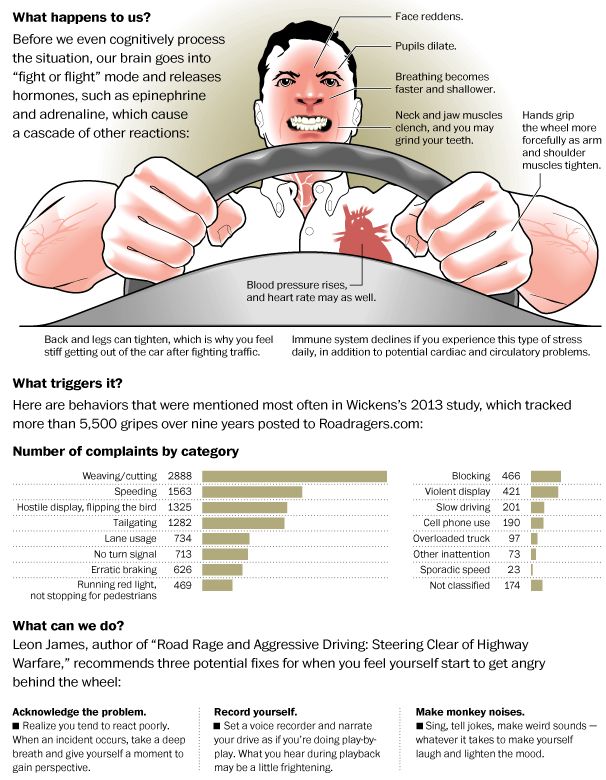 Raise your hand if this has happen to you numerous times out on the road? For me, this is an every day occurrence. I live in Houston and I will tell that I’ve seen some of the most obnoxious and downright cruel drivers on the road. I’ve witnessed quite a few road rages when I first came to Houston. Remember when I did the piece on “Moving to Houston” and I mentioned that I almost died numerous times because of Houston traffic? Well, I did. The way people drive and the way that they treat people is so mean.

Most people probably wouldn’t pull that kind of crap if they weren’t in their car. One of my biggest peeves on the road are: weaving in and out of traffic, people on their phones texting or talking, speeding or going too slow, flipping people off, running right through red lights, tailgating and my favorite, no directional usage at all. I don’t think I’ve ever seen such horrendous driving like this before in my life. In Wisconsin, there were the usual idiot drivers, but nothing (even remotely) close to the hell I experienced upon moving down to Houston.

Pretty much everyday, I experience my pet peeves (mentioned above) too many times a day. I hate it when people will weave in and out of traffic because you know what, that won’t get you to your destination any faster. Just plain and simple. I’ve had people almost destroy the front end of my car completely because they cut me off. Since we live in the Digital Age, I can’t tell you how much I loathe it when people are on their phones. I will be at an intersection and when the light turns green and you’re not moving, I will politely honk at you to move. I really don’t why it’s so important to be on your phone let alone texting. I’ve almost got killed numerous times because people drive distracted nowadays. Another annoyance that I’ve seen a lot since I moved down here is people driving way too fast or too slowly. I can’t tell you how much it aggravates me when people will drive so fast and cut into my lane and then proceed to drive slowly. This is no cat and mouse game. And I don’t play at all!

One time, I was driving and I was stopped at an intersection and this guy in a big Ford F 150 that thinks he’s so special, decides to squeeze right into my lane. He almost completely took my front bumper off. I honked at him and he just flipped me off. Again, don’t piss me off. I took a picture of his license plate and reported him. What even drives me more insane is people not using a directional at all when they need to turn. I’ve seen people cut through 4-6 lanes without signaling let alone look over their shoulder. One time, I was at an intersection and the light turned green. I stepped on the gas and had to brake immediately. There was a guy that blew through the red light in the biggest hurry ever and almost t-boned my car. I honked at him and he just looked at like I was the stupid one.

In a previous post, I mentioned that a guy pulled a gun in my face in traffic. I was so scared after that experience. Everyday when I’m driving, I get so scared that someone will cut me off (think it was me, but wasn’t) and pull out a gun and shoot me. There are a lot of people in Texas that own guns and believe me some will get out their guns and use it. A few days ago at work, I was talking to a customer and she told me that her best friend was shot in the shoulder during her lunch hour. She went to the car wash on her break and some guy thought she cut him off and shot her. I was mortified. I can’t even imagine what that woman is going through and how it will affect her mental health. One time, I was heading out to eat with my family and I accidentally, cut a guy off because he was in my blind spot. He honked at me. I was OK with that because I made a mistake. I’m not perfect. So he followed me all the way to the restaurant and got out of my car and he got in my face. He said: “You cut me off. Can’t you drive?” I said: “I’m sorry. Truly, I’m sorry. I didn’t see you because you were in my blind spot.” I gave him a sincere apology from the heart and he proceeded to lecture me on how to drive. He thought I was a teenage driver because I have a baby face. I said: “Sir, I’m 34. I’m not a baby. You don’t need to lecture me on how to drive. And you know what, I don’t care for your attitude. Now, if you excuse me, I have dinner plans.” I said it just like that in a sincere and apologetic tone. He was lucky that I didn’t come after him when I heard him call me a dumb bitch under his breath. Again, don’t mess with me. When I say that I’m sorry, I mean it. When I say that I don’t put up with rude behavior, I mean it.

People don’t realize that actions like this put stress on others. I’ve gotten panic and anxiety attacks because of this almost to the point where I fear that one day someone just may attack me. I was reading about a road rage incident a few weeks ago in Oregon and a guy bust open a lady’s window and broke her arm in several places. She suffered a compound fracture to her humerus in her left arm. I couldn’t believe that some people have the gull to do that. I’ve been yelled at, I’ve been flipped off, and even had a gun pointed to my head.

If drivers want to do mankind a favor, then learn how to drive more defensively and be less impatient. Lose the inner rage and attitude! I know what traffic is like and I hate it as much as the next person, but people need to be more alert and more kinder to their fellow man.

Posted by No Laughing Matter Living with Depression on Monday, August 27, 2018

Let's talk about mental illness. Meet a survivor of the Triple Threat Disease.

The beginning of the end

Sharing my journey from the beginning.